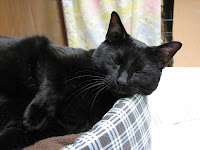 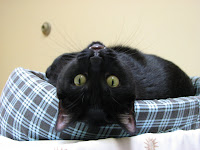 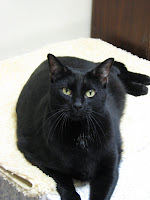 Gadget came to PAWS when his owners were no longer able to take care of him. Life at the shelter has been a pretty big adjustment for this handsome guy, but he's making great strides. Fearful when he first arrived here, Gadget has gotten used to the sights, sounds and smells of PAWS, and we've been able to watch his true personality emerge. And what a personality he has! This five-year old fellow loves to be let out of his cage for socialization time, and can often be found laying on his back. Gadget's also a real chatterbox ... he's always sure to give us a "talking to" if he thinks we're not paying him enough attention. :)
Posted by meowmeowmans at 9:32 PM

Gadget looks like he's adjusted very well! What a sweetie!

We hope Gadget finds himself a super home soon.