Not so Easy, Waiting for Irene

*** UPDATE (Sunday, 2:32 PM): Thanks for your purrs and prayers, everybody! Irene has passed us, and we are safe and sound. :) Please continue to purr and pray for our friends further up the East Coast. ***

Hey Mom and Dad ... let me know when Hurricane Irene is gone, okay?
We will, Sammy.  We definitely will. 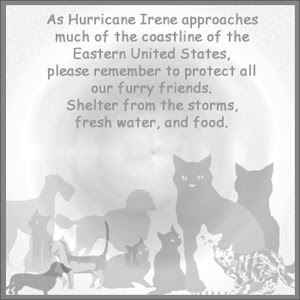 Thank you, everybody, for your love, purrs and prayers ... we appreciate you all.

For all of our friends who are also still in the path of Hurricane Irene ... stay safe!
Purrs and hugs!
Posted by meowmeowmans at 12:01 AM 30 comments:

Cinnamon and her sister Ginger (and their friend Claire) live in the shelter's records room.

Here's Cinnamon making sure that the humans are doing their jobs correctly. :)
Posted by meowmeowmans at 12:01 AM 41 comments:

Buddy and Aunt Tracey plan on taking it easy today.  How about you? :)
Posted by meowmeowmans at 12:01 AM 36 comments:

Hi, I'm Allie, and I live at PAWS. Happy Black Cat Appreciation Day!
Did you know us black cats are only half as likely to get adopted as cats of other colors? And that, on average, we stay several months longer in shelters than any other cats? I really don't understand this. I mean, just look at my picture ... us black cats are beautiful, sweet, silly, and lovable! 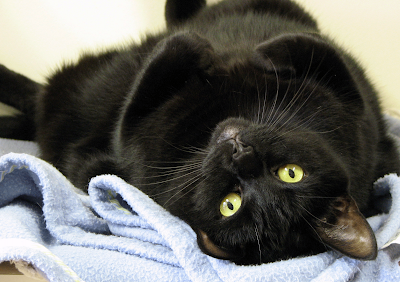 Come check out all the wonderful kitties available for adoption at PAWS today.  And please remember to consider me and the other black cats ... you wouldn't want to miss out now, would you?  And be sure to tell them that Allie sent you! :)
Posted by meowmeowmans at 12:01 AM 50 comments:

An Award and a Photo Contest

Yippee! We won an award! Our blogging friend Diamond and his human, Lynettea, have generously bestowed us with the “Irresistibly Sweet Blog Award.” Thank you, Diamond and Lynettea. We’re honored! 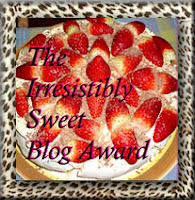 The rules of the award say we have to share 15 things about ourselves, so here are five about Moosey, five about Sammy, and a collage of five cats looking for their forever homes:
Five things about Moosey:
1. He loves water, and is obsessive about going into the shower after the humans are done
2. He has to smell everything – including his brother Sammy :)
3. We adopted him from PAWS, who rescued him from a kill shelter
4. Favorite toys: Catnip mice, string, bouncy foam balls. And FLIES!
5. He loves spending time with the mom and dad on the sofa and sleeping in the bed
Five things about Sammy:
1. Favorite toys: Hex bug and mouse on a bouncy string
2. He loves being brushed (he even tries to brush himself)
3. He adores lounging in his cat hammock
4. He enjoys watching bird and squirrel TV
5. He was found in a feral cat colony, saved from a kill shelter by PAWS, and ultimately adopted by us :)
Petunia, Clara, Rupert, Victoria and Elmer are just FIVE of the many PAWS cats currently available for adoption...

We're supposed to pass the award along to 15 of our friends, but since we love ALL of our blogging pals, we can't even begin to choose.  So we're giving it to everyone who wants it! :)

Now, about that PHOTO CONTEST we mentioned.  PAWS is holding a Cat Photo Contest in conjunction with its "Bark in the Park" event (yes, PAWS rescues woofies, too!).  There are four categories: Silly Kitties, Best Belly Shot, Cati-tude and Cutest Cat. Fees are $5 for the first entry, and $3 for each additional entry. One winner will be selected in each category, and prizes include pet supply and restaurant gift certificates.  The contest is open to anyone (you need not be present to win, and prizes can be shipped).  Deadline to enter is Friday August 26th. For full details click here.
Posted by meowmeowmans at 12:01 AM 35 comments:

Hi, everybody!  Sammy and Moosey here, wishing you all a Happy World Cat Day!  Our Mom and Dad think EVERY day is the purrfect day to celebrate, honor, and remember the two of us, the cats at PAWS, all of our feline friends, and kitties everywhere.

But we love that the Cat Blogosphere has an official day for it, too.  Have a great one! :) 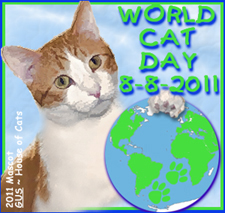 Sisters Loreen and Krystal are taking it easy while they wait for a forever home.

These beautiful girls are about 7 years old, and must be adopted together. They would do best in a home without young children or other animals.  Krystal and Loreen are spayed, current on all their vaccinations, and have tested negative for FIV and FeLV.
Posted by meowmeowmans at 12:01 AM 28 comments: