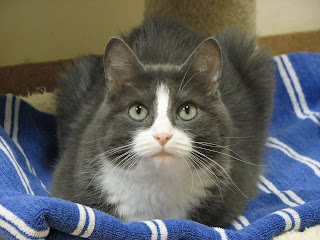 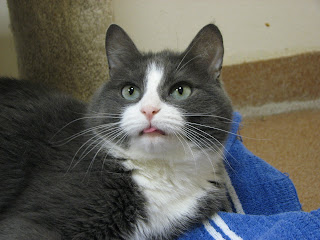 Tracey and I often wonder what leads someone to abandon a pet. We just can't imagine ever giving up our own furry children. And that's why we can't for the life of us understand why someone abandoned sweet Teal in PAWS' parking lot back in October.

This beautiful and petite grey and white tuxedo girl had obviously belonged to someone, so we're sure it was overwhelming for her to be left outside, then thrust into a shelter situation with so many unfamiliar sights, sounds and smells.

At first, Teal was extremely scared. In the "open" cat room in which she was placed, she would hide behind the couch, never making eye contact, and venturing out only to eat or to use the litter box. Despite this, it was pretty clear to us that she was an extremely gentle kitty, and we discovered that if we reached behind the couch, she'd let us pet her, and would eventually purr softly. :)

As the weeks and months have passed, Teal's confidence has grown. She still has a ways to go, but now she can often be found lounging on the couch with her roommates -- or a volunteer. She loves being pet and talked to softly. And we can always tell when she's especially content, because when she is, her little pink tongue sticks out! :) 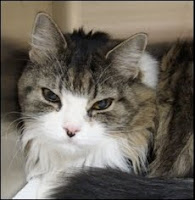 Once upon a time, there were some cats who lived in a place called PAWS. Even though they were well taken care of and loved by the volunteers and shelter staff, the kitties dreamed of the day that they would find their forever homes and people of their very own...
For Tracey and me, it's always a fairy tale come true when some of our shelter kitty friends are adopted. Here are some "happily ever afters" from the past week:
Valerie and Garth, who became nearly inseparable friends after they were placed in the same "open" room at PAWS, were adopted together. :)
Sweet, but shy Ally (pictured above) was adopted by one of our friends, who has re-named her Priscilla. Our friend reports that Priscilla is adjusting well to her new surroundings. She stays close by when her new mommy is doing things around the house, and sleeps with her every night!
Sherwood, one of the charter members of the PAWS "Belly Rub Club," now has his very own people to rub his belly (and otherwise spoil him) to his heart's content. :)
Be well in your new homes, kitty friends. We love you!
Posted by meowmeowmans at 12:01 AM 17 comments: 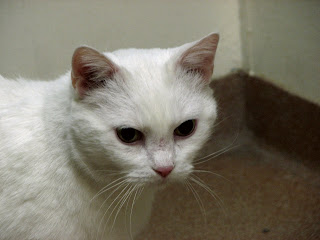 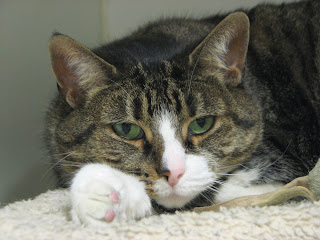 Carrie and Sweetheart are two kitties who have touched our hearts.
Originally adopted ten years ago from PAWS, Carrie (the tabby and white beauty) was brought back to us because, sadly, her owner is moving. This gentle soul enjoys being pet and loves to play with a squeaky mouse toy that was given to her by a PAWS volunteer. Although Carrie ventures out into the room every now and then when her cage is open, she seems to feel safer within its confines. She's still a bit overwhelmed by the whole shelter experience, but we're sure she'll blossom once she's in a home of her very own. Carrie is 11 years young and front-paw declawed.
Sweetheart, a beautiful white kitty of 10 years, showed up at PAWS because her owner could no longer care for her. She definitely prefers the company of people to others cats, and loves a nice warm lap and a good petting! She has a very unique meow that Kevin and I believe may be the result of her being deaf. She also happens to be quite an accomplished purrer! :)
We love these little girlies and can't wait for them to be placed in their furever homes!
Posted by PAWSVolunteer at 12:01 AM 13 comments:

Sweet Pepper Still Looking for People of Her Very Own

Here are some recent photos of our sweet girl Pepper. This amazingly active and alert 15-years young kitty is still looking for her furever home. She's "graduated" from a cage to an "open" room with four other kitties. She is (for the most part) tolerant of her roommates, but is definitely partial to people. :) 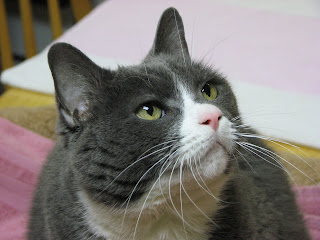 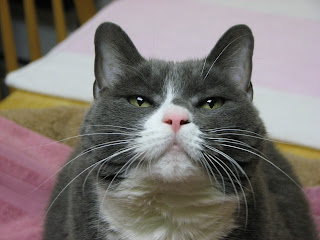 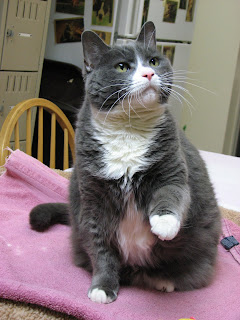 In Memory of Pharaoh the Cat 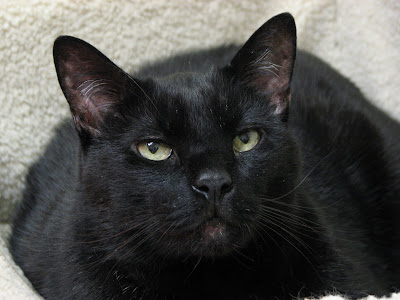 Sometimes volunteering at an animal shelter can be absolutely heartbreaking. This is one of those times.

Today is a sad, sad day for the cat volunteers and staff members of PAWS. We received word this afternoon that Pharaoh -- a sweet and gentle kitty we wrote about in September -- passed away early this morning. This charming fellow had become very ill, and was recently diagnosed with kidney failure. He was taken to a local animal hospital several days ago, and was scheduled to undergo further diagnostics and supportive procedures today in hopes he would get stronger, feel better, and be able to come back to us. Sadly, our Pharaoh was too ill and didn’t survive.

Our wish is for all PAWS animals to be adopted to live out their days with homes and people of their very own. While that didn't happen for Pharaoh, it's comforting to know that PAWS' strict no-kill policy meant our sweet friend was in a safe, warm and loving environment for the final months of his life.

We love you and miss you, Pharaoh. Rest now ... we'll see you later at the Rainbow Bridge.