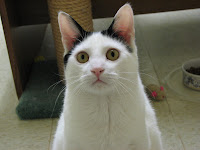 When Thurman -- an adorable white and black kitty -- first came to PAWS, he had a leg injury that required a cast.  This poor little guy had to be confined to a cage so that his leg could heal.  He could only come out under supervision, but when he did, he did so fearlessly ... exploring his room and using the cat scratcher with total abandon.  And despite the cast on his leg, he still loved to climb the lower levels of the cat tree ... he's such a little kitten! This total lovebug is now enjoying life without his cast - hanging out with all the other kitties (he loves this, by the way!) in his new room.  And unhindered by that pesky cast ... Thurman loves to explore the higher levels of the "community" cat tree! 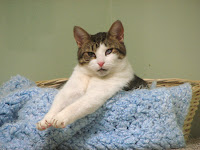 When Kerry first came to PAWS, he had some serious eye problems and we did the best we could to fix things up.  This cute, year-old tabby has no vision out of his left eye limited vision in his other eye, but you'd never know it.  Kerry LOVES other kitties and is very playful ... he's especially fond of toy mice!  And while he can be a little shy at first, once he's gotten to know you, he's a little snuggler!  That's certainly the case with Kevin and me ... when we visit the room he shares with his kitty pals, Kerry is one of the first to greet us at the door.
Posted by PAWSVolunteer at 11:35 AM