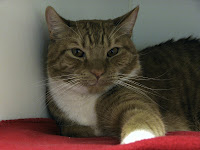 Benjamin, a beautiful orange tabby, tends to be a little shy when he first meets new people.  But if you approach him slowly and pet his head, then scratch him under his chin while talking quietly and calmly, you'll most likely make a friend for life.  A previous owner de-clawed all four of Benjamin's paws so he'll have to always be an indoor cat since he doesn't have any way to defend himself with.  He craves attention, but also gives clues when he's getting over-stimulated.  He has become somewhat "cage-dependent" at our shelter, so it would be wonderful if he gets adopted soon.  Once he's in his forever home, Benjamin is sure to blossom as he realizes that beyond his cage is a safe and loving world. 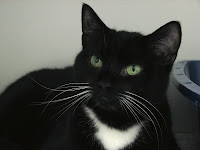 Every kitty and human loves Frenchie ... and Frenchie loves every kitty and human, too!  This adorable black and white tuxedo cat loves a good lap and likes to play with her buddy Mercedes (a cute black kitty in her room at PAWS).  At first, Frenchie can come across as being a little shy.  But if you sit on the floor with her, she'll slowly approach you and snuggle up for some good old-fashioned petting.
Posted by PAWSVolunteer at 11:12 AM