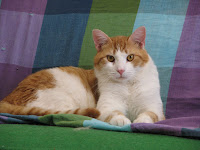 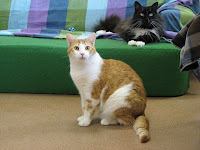 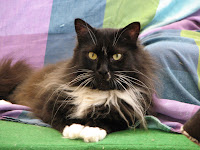 One of our favorite things about volunteering every weekend is being able to witness first-hand the transformative powers of consistency and love on the animals. Watching kitties who formerly avoided human contact learn to trust people is incredibly rewarding. Especially because it makes them that much more adoptable. :)
We've written before about Houdini (the orange and white guy) and Bootz, and continue to be amazed by their incredible progress. It's almost as if a light has gone on for both of them as they've watched the other cats in the room bask in the love and attention lavished upon them by the volunteers. As you can see by these photos, both of these kitties are becoming more at-ease with their surroundings with every passing day.
Houdini, who once refused to budge from his safe spot behind the big cat tree, can now be found lounging on the sofa or in the middle of the floor. Yesterday, as I sat on the floor of the room, Houdini got up off the couch, sauntered over, and laid down about two feet away from me. And today, Tracey was actually able to pet him (twice!).
Bootz -- not to be outdone by his buddy Houdini -- now enjoys laying next to us on the couch. He's also decided he loves being pet and brushed. Bootz is also fond of laying on his back with his belly exposed. Talk about feeling comfortable! Who would've ever guessed?
Stay tuned ... we'll do our best to keep you posted about these guys' continued growth.
Previous posts about Bootz and Houdini:
Update on Bootz and Houdini
Bootz and Houdini
Posted by meowmeowmans at 9:57 PM