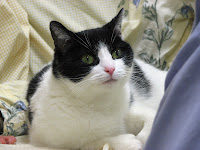 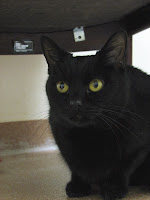 There have been some recent kitty additions to PAWS that I'd like to write about tonight:

Vine (mentioned in my last post and in left pic above) is an adorable, petite kitty who loves the company of people. Kevin and I are just getting to know her so we can't speak too much about her personality but plan to give you more details as we do (unless she gets adopted really quickly which would not be a surprise).

Her brother Raisin (in right pic) is a little more reserved and less confident, but very nice and people-oriented. Although his personality isn't as outgoing as Vine's, he does share the same body type.

It would be awesome for this pair if someone was looking to adopt two kitties instead of one. Maintenance for two cats is not all that much more than one and it's nice for kitties to have companionship ... it helps keep them stimulated so that they don't get too bored when not in the company of their owners/family members.