Today is National Feral Cat Day! Now in its ninth year, National Feral Cat Day was launched in 2001 by Alley Cat Allies, the national advocate for feral and stray cats and a recognized authority on Trap/Neuter/Return (T/N/R) — the program wherein cats who live outdoors are humanely trapped and brought to a veterinarian to be evaluated, spayed or neutered and vaccinated. Friendly cats and kittens are put up for adoption. Feral cats that have undergone the procedure are released back into the areas from which they came, with volunteer caregivers providing a managed food source and monitoring the colony to aid sick or injured cats.

PAWS has been -- and continues to be -- a strong proponent of T/N/R programs. Once a month, the shelter donates sections of its facility to FeralCare -- a local, all-volunteer group dedicated to T/N/R as the most effective way to help control cat overpopulation. FeralCare volunteers capture these outdoor kitties and bring them to PAWS, where veterinarians volunteer their time to perform the spays, neuters and vaccinations.

According to the FeralCare Website, T/N/R is the most humane and nationally accepted way to handle feral cat colonies. Once neutered, unwanted yowling, spraying, cat fights and aggressive behavior toward neighborhood 'social' cats is reduced significantly. Undesirable behavior is averted, and no more kittens will be born. As the method is implemented, the feral cat numbers will gradually decline. 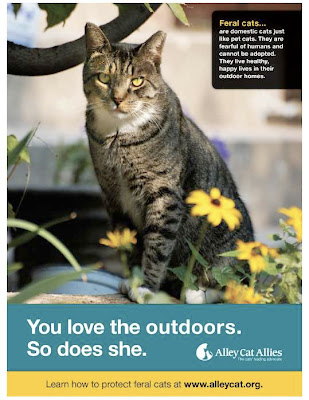 I am really glad that Alley Cat Allies started the T/N/R program. It's the most humane way to handle feral cat colonies.

Happy Feral Cat Day! Our mom is a volunteer for our local TNR Group! They have spay/neutered over 245 cats since 2007. Go TNR!

Alley Cat Allies has been heroes of ours fur a furry long times. Nuttin' wrong wif bein' feral you just need ta be spayed or neutered and inoculated - dats what we always tells our furends.

I think TNR is a great program. May it help all feral cats.

We're definitely supporters of TNR! It is the way to go to reduce the stray cat population and stop the suffering

We think TNR is great!! Mom thought about TNR for Zoey when she first caught her but decided to keep her 'cuz she was too darn cute! (We don't see that cuteness but humans see differently than us...)

We have used TNR in managing our feral colonies - it works!