Hip hip hooray! It's time for another edition of FURever Home Friday, our periodic report about the lucky PAWS kitties who've found their happily ever afters! Let's get this celebration started with a collage of just SOME of the recent grads: 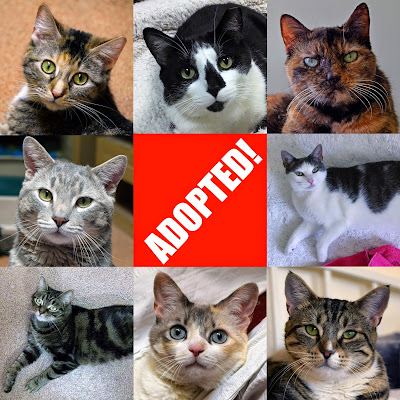 You'll probably recognize most of these cats, because they've graced some of our previous posts. Clockwise from the upper left are Aji, Tom, Fumika, Sioux, Nessa Rose, Zeru, Brownie and Finnegan.

And they weren't the only cats who were celebrating. LOTS more kitties besides the ones in the collage were adopted. Here's the full list (in alphabetical order) of the newest alumni:

ConCATulations to all of our kitty grads, and their families! We wish you long, happy, love-filled lives together. :) 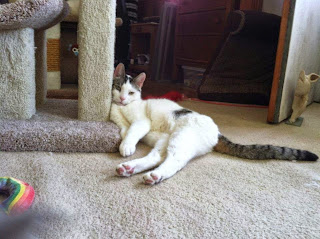 "Max wanted to check in and say hi......he is sick of this heat and humidity but he LOVES getting up in the open windows and enjoys looking out the sliding glass door." 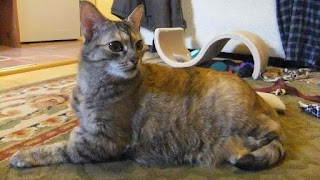 "It’s been four weeks since I brought Truffle home from PAWS. She adjusted well enough almost immediately. My other cat Tumble is an independent feline and there were implied rumors on Truffle's independence as well. Alas, there was no need to keep them separated as long as I was there to reassure that everything was okay. The very first night Truffle slept on the bed and things have been doing very well since then! She has claimed her favorite lounging and sleeping perch (which was Sweetheart's, another beautiful PAWS alumni that passed away allowing Truffle to continue the love in the family). It was amazing how easily she became a house cat again after 6+ years." 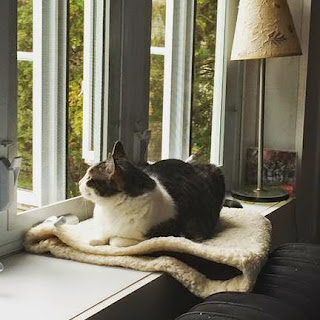 "Since the windows have been open, Molly's favorite place is in or near them. She loves tracking all of the birds and bees that fly by and is a very content little kitty. She is doing so well - we absolutely love her and cannot remember a time before she chose us to come home with."

Reading these FURever Home Friday posts gives me such joy and hope! All kitties deserve a loving furever human, and all humans need a loving feline companion, and wonderful places like PAWS make that happen! Thank you so much for sharing!

I love, love, LOVE these adoption posts! They start my weekend off in a very happy place.

We just love seeing how many kitties have found their furever homes each week. We are sure they will all settle down quickly in their new forever homes filled with love.
Luv Hannah and Lucy xx xx

I love seeing all the new happy family members...

Wonderful! Thanks for sharing the happy news.

May was a very happy adoption month. It's sweet to look back on our cat friends who have found their forever homes.
xxoo
Maggie

So happy to read all the adoptions, especially Cinder and Hermione! (They've stuck in my mind for some reason.) :-)

We always luff Fridays, reading all the adoption stories. Pawsome!

We love seeing the looonnnggg list of adoptees! Yay!

How wonderful! Happy Graduation Day everyone!!!

I love happy endings- I wish every kitty could have one.

Awww, so adorable. All kitties should have a wonderful forever home. Yes they should.

Have a purrfect Feline Friday. ☺

We LOVE these updates! Purr-fectly timed for us this weekend too. Congratulations, kitties! May all your forever homes last forever!

these posts make mom smile (especially the update on Truffle)

The updates always make me smile. I'm glad so many cats have gotten adopted recently! And it's especially wonderful news about Truffle.

Wow, that is a very long list of graduates! Congratulations to all of them!
And all the happy tails are wonderful. Glad they are doing well in their new homes :-) Happy Furever Home Friday!

Aww! good news to see that these lovely kitties now have homes :-)

Have a tanfastic weekend :-)

I love it! Happy cats! Big hugs to all who have helped these kittys!

So happy to hear about all the happy homes.

That is a noteworthy list of graduates! And it looks as though those three alumni have found their happily ever after! :)

Concats to all the kitties and their new beans!

Yay for all the kitties and their forever homes, how fantastic! Great updates too!

We love good news like this!! YAY to the grads and their new families! :)

YAY for all the kitties that have found their forever homes !

Oh, we just LOVE reading about adoption stories! It warms our hearts.

View From My Pram said...

PepiSmartDog: always wonderful to visit your page and see your beautiful graduates!
Very uplifting. Hee Hee.
We always enjoy visiting your site and look forward to seeing what fun you get up to this week too. Thank you for supporting us when we were traveling and for joining our Thankful Thursday Weekly Blog Hop. Hope to see you next week too. *waves paw* :=o)

YAY for everyone but *especially* Truffle!!!

I love this feature! It's so wonderful that so many kitties have been adopted, and that they're settling into their new homes so well.