Check out these selfies by our super handsome, ultra-adoptable new pal, Hemingway. He's one of the sweetest, most happy-go-lucky kitties we've ever met. 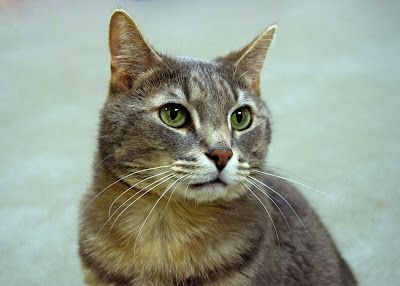 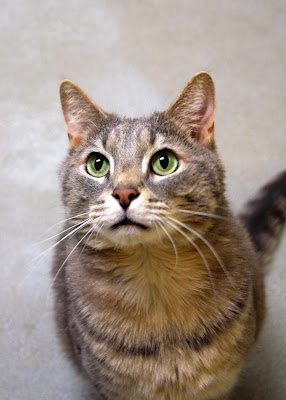 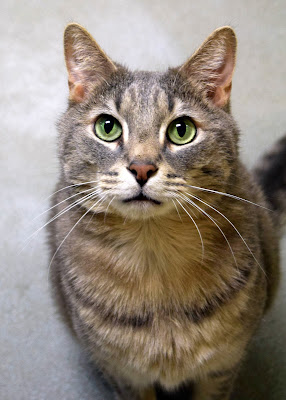 Until late this week, Hemingway was sporting what some refer to as a "cone of shame," which he had to wear after having surgery to remove one of his back legs (he came to PAWS with a badly damaged leg that could not be saved). Throughout the entire ordeal, this awesome dude has been friendly, gentle and afftectionate toward everyone he meets. As for that missing leg, Hemingway says if it doesn't bother you, it certainly doesn't bother him. He gets around just fine, plays, and loves being pet. Hemingway is about 7 years old, neutered, micro-chipped and current on his vaccinations. He has tested negative for FIV and FeLV. He's full of love, and ready to find his happily ever after. Is it with you? 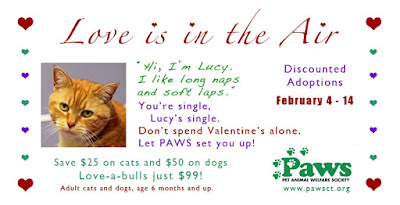 What a handsome guy Hemingway is! I think three-legged cats are lucky for the humans who have them! It's an old kitty tail, but I do believe it.

So handsome! We bet he feels so much better with the damaged limb gone and we are happy he's done so well. We are purring for him to find that furever home soon XOXOXO

Hemingway, you are so handsome with the most meowvolous green eyes. Some of us ladies think we're in love (including our mom). We know you'll do fine with just three legs. We'll be purring that you soon find your forever home. Thanks for being on our hop. XOCK, Lily Olivia, Mauricio, Misty May, Giulietta, Angel Fiona, Astrid, Lisbeth, Calista Jo and Cooper Murphy

Aww, what a hero this guy is! It is awesome that he has been so good throughout, I sure hope someone comes along and gives him the home full of love he deserves....
Purrs, Erin

Hemingway * lets * You are one cool and handsome dude. We would have you in an instant - may fortune grant you a great forever home!

He's beautiful! You know, he reminds me of Caren's Cody! I'm glad he's recovered well and we're all keeping fingers and paws crossed that he finds an amazing forever home. ♥

Hi there Hemingway, you sure are a handsome boy and we so hope you find your new home quickly.

Hemingway is very handsome...and we're glad to hear he's recovering from his surgery well. We purr that he finds a home soon.

You are such a handsome dude Hemingway and we hope you get that happy home soon! Thanks for joining the Thankful Thursday Blog Hop!

Oh, you are so handsome, Hemingway. And I just love that name! I have such a fondness for kitties who are especially special like you, Hemingway. Many, many purrs to you!

Such a love he is! I hope Hemingway finds his forever home soon! Purrs from Deb and the Zee/Zoey gang

Hemingway is adorable. I am sorry he lost his leg, but I know he will get adopted quickly despite that.

What a truly handsome boy your are Hemingway! You went through a rough ordeal and through it beautiful :) We hope an avid reader comes along who can appreciate both you and your name :)

He looks like he could be Cody's brother, sooo handsome!! catchatwithcarenandcody

Hemingway is so handsome....we hope he gets the purrfect forever home soon.

Hemingway is such a fantastic cat! I sure hope he can soon get a furever home. <3

What a handsome man cat you are Hemingway! The mom bean luvs your green eyes. We are sending our purrs that you find your furever home soon.

I love his little mouth. It looks like he's getting ready to speak any minute now!

Jean from Welcome to the Menagerie

What a handsome boy!!! I hope your Valentine scoops you up quickly!

Aw Hemingway is such a handsome boy! It breaks my heart to know he had to go through the pain and lost his leg. But what a trooper he is! He so deserves a safe and loving forever home. I hope he finds it very soon xoxo

Hemingway you are one strikingly handsome dood.

Wow, Hemmingway has an incredible story to tell. He's handsome, charming, rugged, and a real survivor. He sounds pretty amazing to me. Plus he's incredibly photogenic. I sure hope he finds his true love forever home soon for Valentine's Day. So good to see you on the Selfie Hop today!
Love, Pixel

Please join us at Sasha's blog for party games to celebrate his fourth birthday. All of the shelter cats are invited and all of their friends and visitors.
Lynette on behalf of Sasha. p.s he spent the day hiding under the bed, so he needs cheering up.

I think he really earns the name Hemingway ! He looks so intelligent and handsome too !

Basil and The B Team ~ BionicBasil ® said...

Hemingway mew certainly are one seriously special kitty and we hope mew get your fureffur home asap!

Such a handsome-adorable guy. Good Luck Pawkisses to find your furrever home soon <3 <3 <3

Hemingway is quite a name for a cat to live up to! We're sure he will do so given his story and how well he has done with the challenges of his leg. We hope he finds his home soon!

Sweet Hemingway, you are terrifically handsome and we'll send out our adoption vibe purrs that your forever family will make their way to you soon!

Oh Hemmingway, darling blessed little mancat! I hope there is someone out there good enough to deserve you.

Hemmingway is a very handsome boy. After his ordeal he deserves the best home!

What a sweetheart Hemingway is, purrs for a fantastic forever home for him! Happy Valentine's Day to you sweet friends...hope it was sweet and filled with love!

He is so precious!

Aww! He looks like our Frankie (very handsome). And our Joey is missing a back leg, but gets around beautifully.