Everybody loves roommates Elmer and Theodore! 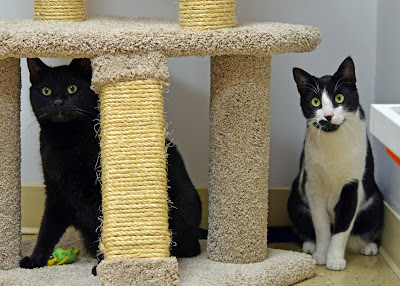 Handsome housepanther Elmer has been at PAWS for a while.* He used to be sort of rambunctious, but he has mellowed quite a bit with time. He's still lots of fun, though. This silly and smart mancat is definitely ready to find his forever home. (* To be fair, Elmer was adopted briefly, but returned when the people were no longer able to care for him.) 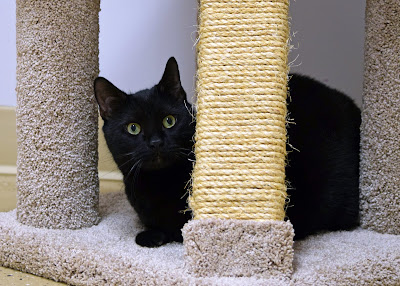 Black and white Theodore has super cool markings, which is totally appropriate since he's a super cool dude. He also happens to love other kitties, and like people (including children!), too. 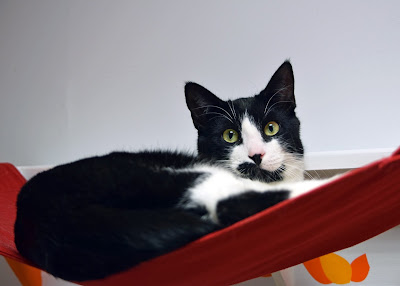 Elmer and Theo are waiting patiently to find their respective happily ever afters. Then again, they get along so well that maybe, just maybe they could find a forever home together. Wouldn't THAT be the cat's meow? :) 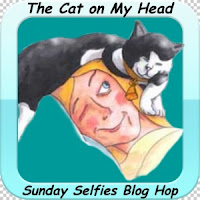 We're participating in the Cat On My Head's Sunday Selfies Blog Hop. Be sure to click on their logo, and see who else is hopping along (or to join in yourself)! :)
Posted by meowmeowmans at 12:01 AM

What a nice pair of kitties! I love Theo's markings too.

Aww, these two guys are so nice, and clearly up for taking a great selfie!
purrs ERin

Handsome boys. Theo's markings are really cool! Hopefully they'll find forever homes soon and won't have to worry about anything other than being a cat for the rest of their lives :)

You guys, we would take you in a heartbeat.

May good fortune reward you with a lovely loving home.

We really hope they can be adopted together. That would be truly wonderful. Everyone needs a bestie.

Oh we do hope they get adopted together. They are both so good looking. Great pictures.

What a couple of handsome guys!

You two are looking great and we'll be purring that you get your together forever home soon. Thanks for joining the Thankful Thursday Blog Hop!

They are both cuties, I hope they can get a forever home together soon.

Oh my goodness, I seriously can't hand this much adorable handsomeness all at once. You two are just too cute and cool, Elmer and Theodore! We are sending you many purrs, and we hope your furever homes (or hopefully shared home!) will be there for you sooner than soon!

It would be lovely if they could find a true forever home together. Company usually is better. :-)

Ah, friendships at the cat shelter. It's the sort of story that warms my heart. I hope these two do find the perfect home soon, but I'm glad they have one another while they wait!

Jean from Welcome to the Menagerie

Elmer and Theo are beautiful kitties ! We hope they find a forever home together soon ! Purrs

Elmer and Theodore, they are both such handsome kitties!
It would be really fantastic if they find forever home together :-)

Oh no about Elmer. Please post his pic to any of my groups and tag us.

What a handsome pair of mancats. Trixie is drooling (mol).
We are purring hard that you get a furever home together, tomorrow already!

Yes it would be perfect if they could be adopted together! Family..hurry. Two babies are waiting.

Aww... it would be lovely if they could get adopted together!

Everyone knows adopting two together is THE way to do adoptions right. Everyone is happy that way!

What a dynamic duo they are!! Hope they'll be adopted soon! Purr from Deb and the Zee/Zoey gang

They are gawjus. We're sharin' and purrayin'. Big hugs to all.

We always feel so sad when we read about people that bring their babies back...sigh... :( We send Extra Good Luck Pawkisses to Elmer and Theodore to find a FURREVER home soon <3 <3 <3

It would be the cat's meow if these two found a home together! Fingers and paws are crossed here that the best possible outcome surfaces for these two cuties :)

Theodore and Elmer are such handsome guys! They look really happy together. It is nice that they have each other. I hope that they are able to find a forever home together soon!
-Purrs from your friends at www.PlayfulKitty.net

What glorious man cats! Mes loves them both! Mes purr a Ying they finds a forever home soon.
Kisses
Your Nellie Bellie

Would'nt that be meowvolous if they can find a home together. They both are certainly handsome, and they sound like terrific cats. Wishing them both lots of luck. Thanks for hopping. XOCK, Lily Olivia, Mauricio, Misty May, Giulietta, Angel Fiona, Astrid, Lisbeth, Calista Jo and Cooper Murphy

Oh wouldn't that be the bestest if they could be adopted together? Hoping you find your true furrever home soon guys.
Luvs
Marty