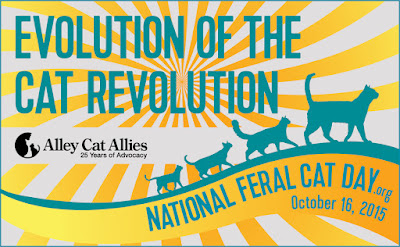 Did you know that feral cats (also called community or outdoor cats) are the same species as pet cats? Or that they live in groups called colonies and can thrive in every landscape? Or that they can be as healthy as pet cats, even though they are (in most cases) unadoptable because they are not socialized to humans? Or that there is a special day to raise awareness about them?

Today is National Feral Cat Day! Now in its 15th year, National Feral Cat Day was launched in 2001 by Alley Cat Allies, the national advocate for feral and stray cats and a recognized authority on Trap-Neuter-Return (T-N-R) — the program wherein cats who live outdoors are humanely trapped and brought to a veterinarian to be evaluated, spayed or neutered and vaccinated.

Friendly cats and kittens are put up for adoption. Feral cats that have been spayed, neutered and checked are released back into the areas from which they came, with volunteer caregivers providing a managed food source and monitoring the colony to aid sick or injured cats. Because they are spayed and neutered, the feral cats don't have to deal with stuff like territorial fighting, mating and pregnancy, and no new kittens are born.


Sadly, in many municipalities, cats are still caught and taken to animal pounds and shelters where they are killed. The shelter system is the number one cause of death for cats in the United States. That’s why it’s so important for people to consider feral kitties today and every day, to help change society and create compassionate communities for cats.
Posted by meowmeowmans at 12:01 AM

We need to keep spreading the word and helping our feral friends year round!

We're celebrating today with a video to help get the word out.

We can't help but feel sad that healthy cats are killed - it's something we aren't used to in the UK.
Luv Hannah and Lucy xx xx

The spaying and neutering is so important. Feral cats make as good if not better pets. It just takes a little while for them to trust you but once that trust comes, they are you best buddies.

Today and everyday we'd like to express our support and appreciation for those guardian angels who maintain colonies, and TNR. On a personal note, without them we wouldn't have our Mickey Mouser (trapped feral kitten) or Rufus the Red (trapped friendly adult).
xxoo
Maggie

We have to keep educating humans about feral cats and that with the proper care, like TNR, they can live happily in our communities.

thanks for helping spread the good word!!!

Great post gang. Those killing places should be called shelters at all.

Excellent post today. The Rescue/TNR group Mom and Dad work with maintains a very large feral community as well as some smaller ones. Mom was very disappointed that neither they or our local no-kill shelter are doing anything with regard to Feral Cat Day; even though, many of the surrounding cities are. Stop by to enter our giveaway for the new book: Simon's Cat Off to the Vet. XOCK, Lily Olivia, Mauricio, Misty May, Giulietta, Fiona, Astrid, Lisbeth and Calista Jo

OMD, we have no idea the shelter system is the number 1 cause of death for kitties! Thank you for spreading an important message. Great post!

What a great post! Big thank you to wonderful people who manage colonies where feral kitties can live a happy and healthy life.

Those care for community cats are some of our purrsonal heros.

We need to do more for our four legged friends than just put them down because they are feral.

Andrea and the Celestial Kitties said...

We always wish for better for kitties. Thank you for all you do for them!!

Crikey I didn't know there was places that kill them I'm shocked :-(

Great post. I am grateful to all those who care for the ferals.

Weez so gwateful to all who care fur da feral kitties in their communties. We live in one of those backwards places what shoots anyfin' they fink be wild and pay da fine ifin they get caught. :( We purray one day there be no ferals to care fur cuz peeps wised up and all cats have luvvin' furever homes. Gweat posty.

I wish there was TNR everywhere and that all the friendly strays could get forever homes. I wish they could all have homes,, but I know some will never adapt.

We have a group that spays, neuters and returns our feral cats to their "homes." It is such a wonderful thing for everyone involved.

In Belgium they try to catch feral cats, neuter them and set them free again where they came from. This is mostly done by volunteer vet students. I think that is a real good idea.

I provide food and fresh water to an outdoor cat who roams the streets and yards of my neighborhood. When I first saw him and started feeding him, he would run at the mere sight of me and would only return for the food when he was absolutely certain that I was back inside my house and out of sight. Over the past few months the distance he allows to exist between himself and me has gotten drastically smaller (the other day he stayed within roughly five or six feet of me as I filled his food bowl, which absolutely thrilled me!). But, he is nowhere near allowing me to pet him, and may never be.

Especially as winter approaches, I have been brainstorming and experimenting with ways to help him keep warm. I have a little outdoor shelter set up and try to keep food inside it, but my outdoor kitty is so far too wary to admit his entire body into the shelter. And, I recently witnessed that certain other critters (as in possums, the weird looking things they are) have been helping themselves to the shelter and food within. So, that's still a work-in-progress.

When I was a kid, we got a feral cat. She was still a kitten but pretty wild. Took a bit, but eventually she was tamed and lived a very long life...23 years. She was the sweetest kitty ever.