Friends on Friday, and a Special Event!

A little while ago, our dear friends at The Cat On My Head (aka The Kitties Blue) had a drawing/giveaway for the awesome swag they got at this year's BlogPaws Conference. And guess what? The random number selector picked US! How cool is that?

There was SO much stuff in the box ... a cat nip grinder, yummy treats, fun toys, a laser pointer, an official The Cat On My Head pen, and more! So much more, in fact, that we were able to share a lot of it with the PAWS cats, including pretty and adoptable Swizzle (who the Kitties Blue sponsor every month, and who is an honorary Blue Kitty)...
Big thanks, hugs and headbonks to you, Lily Olivia, Mauricio, Misty May, Giulietta, Fiona, Astrid, Lisbeth, Calista Jo, and Mom Janet, for being such great friends, and for sharing your loot with us and the cats at PAWS. :)


Speaking of PAWS, there's a special event this Saturday (August 15th) called "Clear the Shelters." PAWS is one of hundreds of shelters across the nation waiving adoption fees on adult cats and dogs for the day! We sure hope it's a huge success, and that many animals find their happily ever afters. You can read more about the event here. 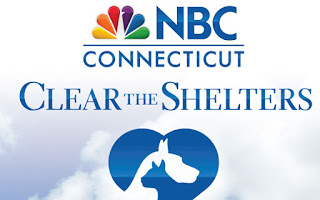 What a great event! I hope lots of lives are saved on Saturday.

What a wonderful selection of goodies for you all. We hope the Clear the Shelters event gets lots of kitties new homes.
Luv Hannah and Lucy xx xx

What a fun package of kitty loot! Kisses to Moosey, Gracie, Zoe, and Swizzle.
And paws crossed for lots of adoptions tomorrow. We saw a commercial on tv featuring Creamsicle!
xxoo
Maggie

Wow gang that's some awesome stuff... how bouts we teleport over for a play day??? Love your Michigan family.

That's a fantastic package, congrats on winning it!

We, too, hope the adoptions are hugely successful. We also hope all applicants in all participating shelters will be screened closely first. Waiving adoption fees has its downside. We're crossing our fingers for the very best outcome for all, though!

Wow, what a fun package to get! We know you'll all enjoy the treats and toys. We hope the adoption event is a huge success!

what a great box....how nice of you to share.

What a great surprise! Have a lovely weekend.

what pawesome prezzies and that event rocks!! The reason the event exists is because Saturday is International Homeless Animals Day (we are blogging about it tomorrow) love that initiative!!! xoxo

Now that's a fun package fur sure!!! Good luck on the event. Down here in the South, we cringe a bit at "free" events...the dog fighters load up on bait animals.

Wow, that's a treasure chest for sure! How wonderful you got so many fun stuff and also shared them with PAWS kitties. Swizzle sure looks very happy :-)
I hope the special event will be a big success! Have a great weekend!

What a treasure box of goodies!!!

What a great box of goodies!! xx

Wow, just look at all those goodies...what a time you all must be having. Thank you for coming to visit our blog..what a treat it is to see when you have stopped by Mumsy's and my blog. We are just sorry we cannot visit you more often. We miss you. Hugs and nose kisses Pooh

guys...itz like Christmas in joo lie but august inn sted !!! conga ratz on winnin on that swag !!! YAY !!! N we hope de adoptshunz ee vent iz a HUGE success all over de countree ~~~

That is a great package of goodies. That is a lovely thought to give some of the toys to the Kitties Blue sponsored kitty, Swizzle.

Those were some great goodies and how wonderful that you were able to share with the PAWS kitties too!

What a pawsome prize - it truly was a treasure chest.

WOW! It is Christmas in August. I truly hope all shelters get cleared out tomorrow.

We're glad you liked all of the swag! And we hope the event is a success!

Whoa! How cool is that you won! Speaking of winning, did PAWS ver get those toys I won for you? I hope I didn’t miss it.

Concatulations on your winning al ofl that wonderful stuff! Best of luck Saturday to all the kitties and doggies looking for homes.

CK, we were wondering the same thing! We will find out, and let you know, okay? Hugs!

aww! Hi Gracie, Zoe, and Moosey! concats on your win! that looks like a lot of fun swag. we are purring that PAWS and all of the pawticipating shelters will have a lot of adoptions this weekend!

congrats on all that loot!

Congratulations on the swag. Score.

Have a purrfect day. ☺

We love Kitties Blue and their Mama Janet too! Such a great gift for all of you:) We hope the Clear the Shelters event is successful! All paws, tails , toes and fingers crossed over here that many, many pets find wonderful forever homes :)

Wowzers! Y'all definitely hit the jackpot with that win! Congratulations.

Having just taken in an abandoned kitten we are full up now at 8 cats but I think this is a great event.
How neat your kitties won all those great cat goodies, they look happy with them.

OK 1) Sorry we are late - Congratulations you are worthy winners indeed. Mum squeed at Moosey ::eyeroll:: but conCATs from us kitties too!!!!

2) We tweeted about #cleartheshelters. We dearly hope it is a major success and that you find homes for PAWS kitties!!

So cool of the Kitties Blue and Janet to share their loot with you. Hope your event was a success!

Dear Gracie, Zoe and Moosey AND Swizzle. We are so happy you won these goodies and super happy you are enjoying them. Sorry we missed this post. We love getting to see all of you. Mom sends kisses to all four of you and many thanks to Dad Kevin and Mom Tracey for everything they do for the PAWS kitties. XOCK, Lily Olivia, Mauricio, Misty May, Giulietta, Fiona, Astrid, Lisbeth and Calista Jo and love from our mom

that was a wonderful package to win indeed.

So how many animals went home from your shelter?

Lucky kitties. They got some great stuff.

How wonderful you won all that great stuff from Kitties Blue and Janet! And we love the "Clear the Shelters" program - I believe some 700 pets were adopted in our area and we hope the event was a great success for you as well. Purrs from Deb and the Zee/Zoey Gang!