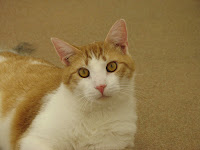 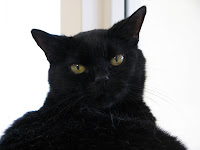 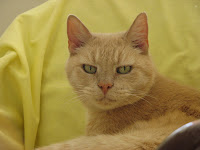 Reggie
We wanted to share some nice updates we've received from the new forever homes of some PAWS graduates. :)
Houdini, the adorable orange and white cat who was nearly feral when he first came to PAWS, and who underwent a miraculous transformation to become the "official greeter of humans and felines alike" in his open cat room, is doing extremely well in his new home.
We mentioned before that Reggie and Raisin, two of Houdini's old roommates, were adopted together. Their new dad wrote to say that the guys are doing great. He shared that "Reggie just swaggered out of the crate and took over." He also shared that even though Raisin has been a bit shier, he's also adjusting well and enjoys play time ... everyone seems quite happy.
Congratulations to Reggie, Raisin and Houdini! We love you all, and know you'll continue to do well in your new forever homes. :)
Posted by meowmeowmans at 12:01 AM

This is fabulous! We just love happy endings!

Such wonderful news. Thank you for sharing!